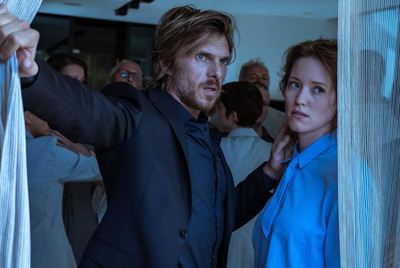 Director Jan Verheyen, whose “The Verdict”, was one of my favorite films of 2013, introduced the screening of his newest film, “Control” by optimistically joking, “this film is unlike most film festival movies…in that it’s entertaining”. It got a laugh, and I’m sure he meant it as such (and, to be fair, he quickly walked it back with “I suppose time will tell.”). But while the premise of his gag was eyebrow-raising, he was right about his film…it was entertaining. Sadly, when compared to a dense masterpiece like “The Verdict”, which tackles so many societal issues expertly, a simple procedural about a serial killer is really all it is. Maybe that was the sum total of his aspirations…to spin a really good yarn. For the most part, mission accomplished. It’s well written, looks great and has very good performances.

The script, based on a novel by Jef Geeraerts, has all the elements of a procedural: a horrifying crime, adequate misdirects, interesting characters, moments of real humor, and a fairly satisfying ending (if a bit telegraphed). By focusing on the relationship between two detectives who are close friends – and how this case affects that relationship – the film hopes to keep us off guard, unsure of who is who and what is what. The problem is, the opening sequences don’t set up a relationship commensurate with the conflicts that occur pretty soon thereafter, which makes for a bit of confusion. What IS important to our protagonist? Why does it matter? Troubling issues in a crime drama.

But these story/editing bits aside, Verheyen knows how to shoot pretty pictures…even when those pictures are of hideous things. The other thing he’s very good at is shooting pictures of very pretty things. He LOVES the sex scenes between two of his main characters. Why not? They are both stunning to behold, and the scenes are an important part of the plot. However, the LENGTH of those scenes are utterly gratuitous – like Paul Verhoeven gratuitous – and simply stop the momentum of the story dead in its tracks

The performances are fine. Werner de Smedt, looking like a young, and more attractive Richard Branson, makes for an excellent “hasn’t-slept-in-a-week” grizzled detective whose instincts make up 90% of his abilities. His boss, played by holdover from “The Verdict”, Koen de Bouw, carries the emotional weight necessary to ground the entire story. And the love interest, Sofie Hoflack, is gorgeous and mysterious, but is simply too young to pass for a person with the depth of psychiatric knowledge and business acumen necessary to run an entire facility…which is, alas, a very important piece of the puzzle. There are more than a couple scenes, involving everyone mentioned, that feel incredibly forced, so this is not a perfectly performed film by any stretch, but, overall, the entire cast inhabit this world with enough acumen to keep us invested throughout.

This film won’t win awards. And as a crime drama, I can pick out ten current television series (all European) that do it better. But, if you can get past its minor flaws (and its slightly overlong running time), it is, indeed, very entertaining.

Trailer has no English subtitles, so, watch it for the pretty pictures…