Directed by The Rock…no, not really, apparently Brad Peyton “directed” it 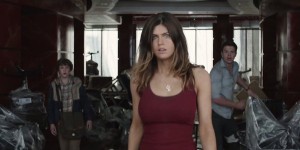 So, you have to work really, REALLY, hard to make a movie this bad. I mean, “San Andreas” makes “Showgirls” look like “Citizen Kane,” so I won’t waste your time with a review EXCEPT to say this:
1) Alexandra Daddario (pictured) is the only actor in the film not counting her money before she performs. She is at least TRYING to make the script sound reasonable.
2) One of the saddest, long-lasting cultural results of the 9/11 tragedy is the way it has taught big budget directors how to make disaster porn look legit, and nowhere is that more evident than in this movie – with “Ultron” being a close second. But where “Ultron” had the decency to limit this to one collapsing construction project, “Andreas” uses the Twin Tower imprimatur everywhere…all the way down to the scraps of paper on the fence, asking if anyone has seen a loved one, and another saying “San Francisco will come through this together”. A time may come when no one is able to notice this, but not yet. The script is so horrendous that I was almost willing to give it a pass on grounds that, y’know, inadvertent hilarity is still hilarity, right? And I love me some badly written Summer Blockbuster (which is why I went to see it on a half price Tuesday night, while it was still in an IMAX theater). But by the time the ending rolled around, I was deeply resentful of the obvious and intentional comparisons.
Oh, and speaking of the ending…the entire lead up to the Big One surrounds the tragically massive buildup of cities along the fault line despite scientist’s warnings about an impending disaster, and yet, the last two lines of the film (SPOILER ALERT) are:
“What now?”
“Now…we rebuild!”
Umm…