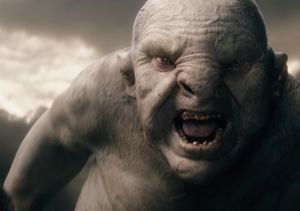 I loved it, but you don’t care about that. You need me to be more objective, since it’s obvious I like the films since I went to a nine-hour marathon, right? So…is it good? It is, no doubt, but it has very little of the charm of the first two. Due to the nature of the plot – and that it’s a finale – it is “important” and “serious”. Luckily Martin Freeman is in it. That helps. A lot. But if you are seeing it based on your enjoyment of the first film, you’ll probably be disappointed.

One thing I loved about the script was that the ending of act three was slightly underwhelming (not the postscript – it’s fine and necessary and not too long, gratefully). By doing so, Jackson stayed away from the trap of most grand epic endings. This one felt much more human and less “fantasy.”

The performances are all very good, sometimes great, especially when Freeman or McKellen are on screen. And Billy Connolly has a two-scene cameo…yay! It is, as you would expect, a stunning – often breathtaking – visual and aural experience. Also the score is much better and less intrusive than in “Smaug” (and not one dwarf sings!).

Overall, it made for a really fine conclusion to an often flawed, but ultimately satisfying, trilogy!

Unfortunately, this screening was presented in the new-fangled High Frame Rate that Jackson is championing for some reason (even though the first two movies today were not). Avoid this at all costs. It makes anything that isn’t a long-shot look like a sixties black-and-white soap opera and ruins any sense of the cinematic. I saw the first “Hobbit” film in this format two years ago and swore to never do so again. The difference, however, was that this movie is much more epic and grand, with a high percentage of long shots, so you get used to it quickly. Also, the story is more gripping, so you forget about it when it’s obvious.